While Chile is not crawling with spiders, there are a few to note.

I was very surprised to see 2 tarantulas here down in the Lakes region – one dead and one alive.

Here is the dead one found at the Saltos de Petrohue. Kind of shriveled up but still I would not want to meet one up close. The other I saw was caught by a young boy in Puerto Octay.  He was having a good time playing with it so I guess they aren’t too aggressive.

The rose colored tarantula of northern Chile is commonly found in pet stores in North America. The one in the south is the Andean or Patagonian tarantula. Tarantulas rarely bite and they usually give you a good warning before they do. The bite can be painful but is harmless. They also can throw irritating bristles at you from their abdomens as a deterrent.

The tarantula below fell out of an avellano tree onto this guys shoulder while he was pruning the tree and he brought it over for my friend to look at. She was very brave and let it crawl up her arm!

The Chilean brown recluse is a spider I see too often in my yard usually hanging around the clothesline and sometimes on my clothes. The Chilean variety is particularly venomous though is not aggressive and won’t bite unless squeezed like between you and your clothes. The bite can cause a large necrotic wound which is quite painful. This spider is considered by many to be the most dangerous of  the recluse spiders and its bite is known to frequently result in severe systemic reactions, including death. They can be easily identified by the darker brown violin shape on the abdomen. It is known in Chile as the arana de rincon or the spider of corners as it likes to live in dry dusty out of the way places like closets or sheds or woodpiles. I guess mine didn’t get the memo!

And the third is the black widow which I have seen frequently in South Carolina but not here in Chile and is easily identified by its black body with a red hourglass shape on the abdomen. It is known as the arana de trigo or the spider of wheat as it is often found on farms. There is a Chilean legend of the virile farmer who is called “spider bitten”. As it turns out this legend has some scientific basis and the story can be found on this link to Reuters. Caution – this article linked has adult content – not suitable for children 🙂 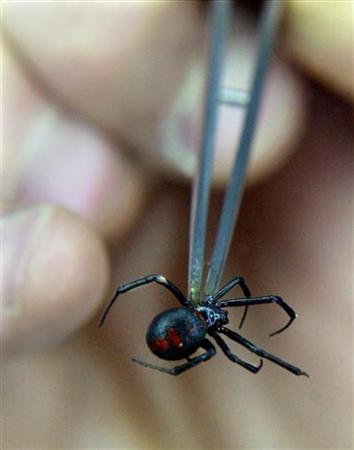 3 thoughts on “Spiders in Chile”