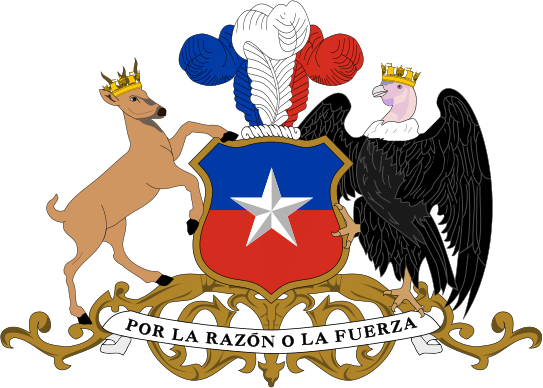 Today’s post is about the Chilean coat of arms because it includes two of its most unique animals : the condor and the pudu.

The coat of arms was designed in 1834 by English artist Charles Wood Taylor. The plumes represent the plumes worn on the hat of the president of the Republic of Chile.

The colors red, white, and blue are found on the flag with the single star. The condor and the deer are wearing naval crowns that represent the heroic deeds of the Chilean navy.

The motto is “By reason or force”.

It only grows to 35-45 cm at the shoulders that is 14-18 inches tall and 6-13 kg or 14-30 pounds.  The antlers found only on males and shed annually grow a couple of inches long and can curve back like a mountain goat.You can see the antlers in the picture above. All pictures were borrowed from Wikipedia.

Pudus are mostly solitary and only come together during mating. Fawns are born in November through January which is the austral summer months singly or in pairs. Herbivorous, they live in the bamboo thickets of the Valdivian rainforest. Predators include magellanic horned owls, the fox, and pumas. 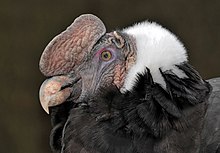 What a handsome guy! The Andean condor (Vultur gryphus) ranges from Colombia all the way down the western coast of South America to the southern parts of Chile. Love that white ruffle around the neck which is absent in females. The condor is one of the largest flying birds in the world reaching a wingspan up to 10 feet 10 inches or 3.3 meters.  The head and neck are featherless because vultures are carrion eaters. It is also one of the longest lived birds living up to 70 years. It is on the endangered species list but is making a comeback in some countries through the release of captive bred birds and through education of the local people that condors don’t kill livestock just clean up the dead ones. 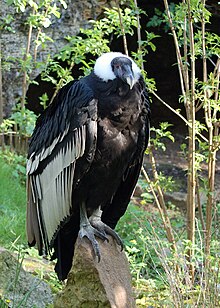